On Friday night Unified Technologies hosted their First Annual Awards Banquet. More than 60 employees and their spouses or dates gathered at the Cardinal Club in Simpsonville to enjoy dinner, celebrate a record year, award employees and set the path for 2016. We’d like to give a huge thank you to our business partners who generously sponsored the event. Thanks to them, all employees from each office had a chance to gather together, celebrate our successes and view the plans for the future.

The ceremony kicked off with a song written by Lexington Technician, Ron Coleman, and performed by Unified’s own Ashley Logan. Ashley was accompanied by Chad Daddy and the Dialtones. That’s our own company band made up of Chad Acree and Christian Beary on guitars and Lee Sanders on drum. Set to the tune of Fleetwood Mac’s Dreams, Ron crafted a story of the people that make Unified the special company it is today. Check it out below.

2015 was a record year for Unified in sales and installations. Six Sales Representatives exceeded the million dollar mark. Unified’s Core Values were introduced to the employees, goals were set and a path was laid for 2016. The Core Values, embraced by all employees, will be posted throughout the offices as a reminder of the Unified’s philosophy and approach to daily business.

The night’s main purpose was to focus on the employees and recognize the efforts of the past year. Two new awards were created and introduced. The first award was given to and will be named after Helen Clasby. The Helen Clasby award is a beautiful glass sculpture depicting deep roots, outstretched braches and an embedded heart. The tree shaped award will be given each year to the employee who best exemplifies Unified’s Core Values. Helen is a deserving candidate and it is fitting that the award will now bear her name. As all of our employees and most customers who have worked with Helen know, she is the heart of the company. Helen’s attitude and determination to deliver excellent service sets the high standard we strive to achieve on every interaction with our customers and each other. 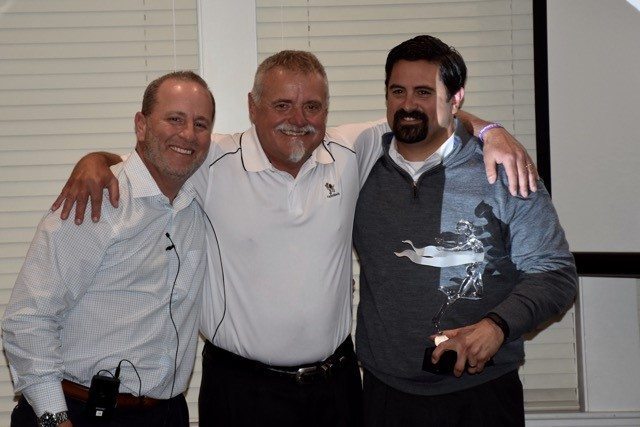 The second award was named for Mike Fischer. Mike’s vision and guidance has laid the groundwork for the success of Unified Technologies. Scott Diamond, President, introduced Mike and allowed him to present the first ‘Mike Fischer Award’. The new Mike Fischer award will annually recognizes the employee who has goes above and beyond to keep Unified at the leading edge of the industry. This year’s recipient is Mike Gabhart. Mike not only exceeded 2.5 million in sales in 2015, he also created the concept today known as Unified’s ‘Managed Services’ offering and developed a new strategy to grow the business in 2016. Gabby, as he’s affectionately called, was key to the growth and future plans of Unified and is more than deserving of this honor. The night ended with a champagne toast to the successes of the past year and the goals of 2016.