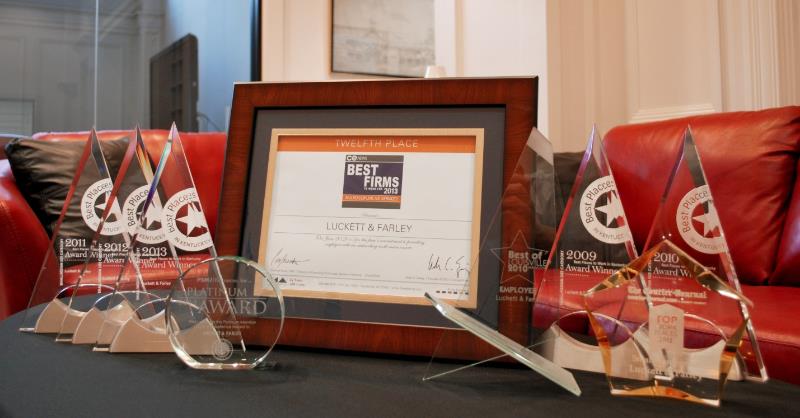 Congratulations to our customer Luckett and Farley for ranking 12th in the nation as one of the “Best Firms to Work For”. We had first-hand knowledge of their incredible work environment when we installed a ShoreTel for them last June. It’s an honor to partner with such an innovative, creative company. Their fine example is motivation for us here at Unified to strive to continually improve our processes and our work environment. And the fact they just celebrated their 160th anniversary is testament that they must be doing something (or a lot of things)right. Well done, Luckett and Farley, well done.

During an awards ceremony in Chicago, Louisville-based Luckett & Farley Architects, Engineers and Interior Designers was ranked 12th among hundreds of firms across the country as one of the Best Firms to Work For in the Multidiscipline A/E Service Firms category.

The 13th annual ZweigWhite Best Firms to Work For Award recognizes the top architecture, structural engineering, civil engineering, environmental and multi-discipline firms in the country based on their workplace practices, employee benefits, and employee retention rates among other factors. It is the first time Luckett & Farley has received national recognition for its workplace achievements.

“What a great honor to be recognized on a national stage for the efforts of our employee-owners to create such a uniquely wonderful firm,” said Ed Jerdonek, President & CEO of Luckett & Farley.

The firm has received local accolades since 2009 as a Best Places to Work in Kentucky, Courier-Journal Top Work Places and a Best of Louisville® Magazine Employer.

“Our firm’s strategic mission is to become the A/E Employer of Choice not just in Louisville or Kentucky, but the preferred destination for top talent and clients  everywhere who want to work with professionals who are more satisfied, which in turn, results in a better work product and better service,” said Jerdonek.

Jerdonek was asked to speak at the Best Firms to Work For Conference to explain to firm leaders Luckett & Farley’s culture and its A/E Employer of Choice continuum. During his 30 minute presentation, Jerdonek discussed the business case for making the change, which includes psychographics in today’s workforce and pure blind faith.

Last Friday, Business First announced that Luckett & Farley ranks number one among the top 5 architectural firms according to the number of registered architects.

“In 2013, Luckett & Farley is celebrating its 160th anniversary. That’s a lot of lessons learned in various economic climates. Today, we are creating a place where smart business decisions and top talent have allowed the firm to flourish in the past several years. We don’t plan on slowing down,” said Jerdonek.