We at Unified Technologies decided to honor our “Man of the Year” Mike Fischer with a roast.  We called it a “Fish Fry” and fry we did!  The entire company along with members of Mike’s family and some of his closest friends gathered at the Press Club Lounge at Papa John’s Cardinal Stadium last Saturday night to roast and toast our fearless leader.

To start off the event we had a “Big Head” of Mike created.  you may have spotted it in the student section of the UofL versus DePaul basketball game. 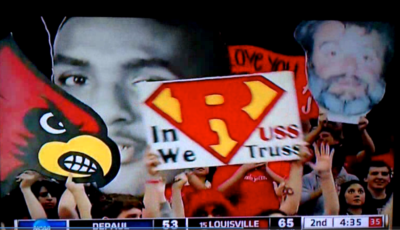 The festivities began with a wonderful buffet and a bar that featured “The Fish”:  a signature drink featuring Woodford, Chambord, Triple Sec and diet Sierra Mist (don’t knock it until you’ve tried it) from the bartender on staff.

The roast, or “Fry” as we like to call it featured several “Fish Stories” from some of the Unified employees.  Mike’s friend from college told some tales that made a few jaws drop.  Michael Gabhart recreated the famous “Fish Boot Camp”; white board and all, and Teri U’Sellis read a “Top 10 List”.  Paul Schulten closed the meeting with more funny stories and jabs before turning the microphone over to Mike for a few parting shots.  We laughed ‘til our faces hurt. 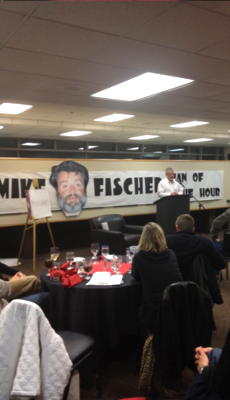 There’s no better way to combat the stress from a year of hard work than an evening of serious laughter.  Try it sometime.